It always amuses me how a whimsical name can turn a dish into child friendly feast.

I have called this traffic light pasta purely because it features a red, amber and green vegetable but the entertainment factor for Ted saying it was pasta with traffic lights was too much to resist.

You could use jarred sundried tomato paste although here I have liquidised the ones in oil together with some basil.

Toss into some cooked spaghetti.

And roast some tomatoes and peppers. I used these colourful mini ones in a bag from Tesco.

Mix it all together and ta-dah, traffic light pasta.

Directions
1. Boil the spaghetti in a large saucepan according to pack instructions. Preheat the oven to 200c / gas 6.
2. Arrange the tomato halves and pepper slices on a baking sheet lined with parchment paper. Drizzle with olive oil and roast lightly for 15 minutes.
3. Using a stick blender, briefly blitz the sundried tomatoes in oil with the basil and set aside.
4. Steam the spinach – I microwave mine in a plastic microwave saucepan.
5. When the pasta is cooked, stir in the sundries tomato and basil mix. Add in the roasted peppers and tomatoes and the cooked spinach. Toss the vegetables through and serve.

To add protein to this dish you could grate over some cheese or add some chunks of cooked ham.

I am entering this tomato ingrediented pasta dish into this month’s tomato themed Pasta Please organised by Jac Tinned Tomatoes and this month hosted by Michelle at Utterly Scrummy – and also her event Extra Veg hosted alongside Helen at Fuss Free Flavours.

It’s also definitely a Speedy Supper for my new event alongside Katie (hosting this month) for main meals ready in under 30 minutes.

Don’t forget also if you have a pud ready in similarly speedy time you can enter it into Dead Easy Desserts.

Drumming up dinner one night it occurred to me there was a gap in the blog event calendar for food fixed up in flash.

So after a quick chat with my blog buddy Katie at Feeding Boys we dreamt up Speedy Suppers, a new blog event for meals made in under 30 minutes.

How to enter Speedy Suppers

Speedy Suppers runs from 1st month to 29th with full round ups of all entrants who have mentioned the challenge in their newly published post.

Speedy Suppers will kick off being hosted in alternate months by myself at Dinner With Crayons and Katie at Feeding Boys.

Blog any speedy supper or family meal. We don’t mind so much what time of day you eat it, more so that your dish only takes 30 minutes or less to prepare. Please display the Speedy Suppers badge in the post with a link to that month’s announcement and both hosts, myself and Katie.

Short cuts and cook ahead elements are actively encouraged i.e. using sauces, frozen food, left over bits and pieces as a component. So long as assembling/the bit where you actually cook it takes under 30 minutes that’s fine. Add the URL of your post to the linky below. This a blog hop so feel free to add the code to your own post so your readers can admire the entries received so far.

Please be mindful of copyright, we don’t mind if you’ve adapted something from elsewhere or you made it from scratch. But if you submit something found online or in a book, just tell us where you found it.

One picture from each post submitted will be use in the round up, these pictures may also be shared on social media to spread the word about this event i.e. Pinterest, Google Plus etc etc. If you object to pictures submitted being shared elsewhere then please drop me an email.

We don’t mind you submitting your entry elsewhere to other challenges but please be mindful of other events’ rules.

So my first speedy supper is…

Boil the pasta in a large saucepan until al dente.

Meanwhile use a hand blender or similar to blitz the aubergines and low fat soft cheese until smooth.

Drain the pasta and mix with the creamy cheese and aubergine.

Serve immediately in bowls whilst scattering and folding rocket leaves and walnut pieces. Add tomatoes if you wish.

Add your speedy supper dish to the linky below! Don’t forget this is a blog hop so feel free to add the code to your own site and encourage your own readers to take part.

Don’t forget if you have something swift and sweet or pudding like you can enter it into Dead Easy Desserts over at Maison Cupcake which has been extended until Feb 29th after a late start in mid January!

It’s been a while since I bought jars of sauce.

I used to use them quite a bit when I worked full time but since becoming a more confident cook I’ve been less reliant on them.

Possibly no longer having the incentive to save glass jars stopped me buying them. The cellar shelves were rammed with eight jars each of a myriad of styles and sizes. I used to select bottled sauces on the desirability of the shape/size versus familiarity with how easily the labels washed away and how reliably the safety buttons would suck back down sealing the new contents. With the cellar shelf complete, little jam or chutney making in process and a desire to reduce the inconvenience of recycling glass, fewer jars were bought in our household.

My most frequently bought sauces in jars used to be Sainsbury’s stir in sauces of mushroom and pesto (short squat jars with vertical ridges), Buitoni (because it was the closest shape to some Italian ones given to me when my Italian housemate returned to her homeland) and Bisto cook in sauce (tall jars with straight sides that had lids with excellent safety buttons).

I would generally have bought Ragu for its lasagne sauces; tomato and bechamel. Oddly one thing I’d not done with stuff in jars was pasta bake since I’d previously been under the illusion it was necessary to pre-cook the pasta and bunging sauce on boiled pasta was quicker.

So when Ragu asked me to road test their new range of pasta bake sauces, I knew they’d be a big hit for dinner with Ted and said yes.

They’re a one dish dish if you get what I mean. No saucepan and no boiling.

Last Thursday I was feeling decidedly under the weather and was looking for a low effort supper and the Ragu pasta bake came to the rescue.

Even in my fragile state I managed to weigh 200g of pasta, tip over the sauce and some water and bung in the oven.

After about half an hour you give it a stir and add some cheese. Since I’d not been up to grocery shopping our cupboards were somewhat depleted and I had to forage for what as left to use instead of normal ordinary grated cheese.

I added some chunks of tomato and chive Boursin and a little grated parmesan. And I chucked in some leftover peas and beans from the fridge.

I was able to pop it back in the oven and go back to moping on the sofa.

This pasta bake was tomato & herb however other flavours in the range include tomato & bacon, tuna, cheese & bacon. For vegetarians there is also tomato, garlic and chilli.

At £1.99 I find them a tad expensive however if I saw them on BOGOF I might stock up on them.

I was attracted to being able to make a pasta dish that didn’t require babysitting a saucepan which might boil over. If you were serving this dish to four people you’d need something else along side as this was only enough for 2 adults and 1 child by itself. I’d normally cook 50g pasta per person if there was an accompaniment or plenty of ingredients padding it out.

With thanks to Ragu for samples of pasta bake sauce which no doubt will reappear here in the next couple of weeks. Say hi to them on Twitter @raguUK.

With thanks also to Boursin for the now diminishing soft cheese mountain. Say hi to them on Twitter @boursincheese.

I had two cooked flash fry steaks left over plus one cold lonely beef burger off the barbecue.

Come supper time I chucked the lot into the Magimix and blitz blitz had cooked ground beef ready the throw into the dinner.

It’s fairly pointless blogging a bolognaise sauce – this post is really about using up cold cooked beef so I won’t go into huge detail.

Just soften an onion in olive oil, add some tomatoes and garlic.

If I’m making minced beef in a large enough quantity I tend to keep the first batch for pasta (or a cottage pie if using stock rather than tomato) then spice up the second half in a chilli. Since this was just using up left overs I was a little sad not to have enough to do this!

With a sprinkle of cheese and few torn bits off the long suffering basil plant it was another speedy supper.

How do you use left over beef?

This dish using left over ingredients is also being submitted to:

Credit Crunch Munch organised by Helen and Camilla, this month hosted by Elizabeth

No Waste Food Challenge, organised by Kate, this month hosted also by Elizabeth

This blue cheese pasta bake is the result of a “fridge dive” using up ingredients in the fridge. 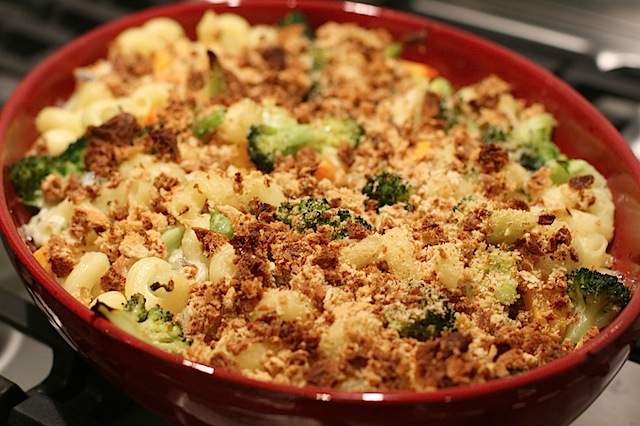 I don’t know why pasta bakes have been under used in our house but I intend to change this. Generally do pasta straight with sauces or pesto, our favoured shapes are linguine or quills. I don’t like farfalle butterflies as the centres are still hard when the outside is cooked.

Recently I saw a pasta bake in a picture that used this spirally pasta and I went out and bought some – it’s the de Cecco brand in blue and yellow packets. They do all the best shapes! Interestingly though, my Italian friends who used to live with us favoured Buitoni as their dried pasta of choice.

One of my new year’s resolutions is to make my own pasta, I have not done this yet but have purchased a pack of 00 flour in readiness.

At the weekend I spotted all the big packs of Stilton being marked down in the supermarket – 500g cost just £3.50 and I might have bought 1 kilo for £5 but this seemed a bit excessive.

I’m ashamed to say the broccoli and butternut squash had been lurking in the fridge since before Christmas – the butternut squash having had its end sliced off a couple of times to keep it fresh. My mother would probably have thrown it away but beyond the first 2mm of cut surface there was really nothing wrong with it.

This pasta bake, served in my late Grandma’s glossy red ceramic dishes fed the family for two meals. All of us together the first time then each of us enjoying a separate lunch or supper. My husband welcomed the change from sandwiches and I’m going to make pasta bake a regular event from now on. 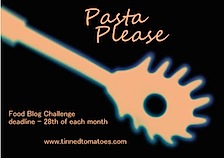 I am sending my pasta bake to two brand new blog events run by my friends. The first is Pasta Please hosted by Jacc and the second is Credit Crunch Munch hosted by Camilla jointly with Helen.