Saturday lunch so often means soup in our house. Prior to every supermarket trip I’ll do a sweep of the fridge bottom drawers and see what can be used up in a soup for lunch or maybe a curry that night.

Leaving a nice clear space for the fresh new ingredients I’m about to stock up with.

Anything that might be too lacklustre to eat raw or you’re just generally sick of the sight of can be simmered and blitzed in a low cost lunch dish of soup.

With soup a healthy eating, thrifty, convenient option, there’s very little excuse for wasting vegetables. You don’t even have to be eating it that day, I often freeze soups in flat single portion pouches by laying bags in a larger box. This way you can stack them up in same size piles when frozen.

It goes without saying that you might chuck anything into a fridge bottom soup but here’s what was in ours today:

You will need a blender.

1. Heat the oil in a large saucepan, when hot fry the chopped onion until soft. Add the garlic and continue to fry until golden brown.

2. Add the carrots and the stock. Bring up to the boil and simmer for ten minutes until the carrots are cooked.

3. Add the tomatoes, heat through. Turn off the heat and blend thoroughly either with a stick blender

4. Serve with good bread and butter. Serve immediately or freeze for later.

This soup is being submitted to the following blog events:

No Croutons Required hosted alternately by Lisa and this month Jac at Tinned Tomatoes with the theme “blended soup”.

Credit Crunch Munch organised by Helen and Camilla and this month hosted by Michelle at Utterly Scrummy.

With thanks to Buy It Direct for the blender and Lurpak for the sourdough and sample of their new slow churned butter.

It’s definitely that time of year again, after a summer of salads, soup is firmly back on the menu. My six year old even asked for some for his supper.

Normally I consider soup a weekend lunch type of thing, I quite often make soups on Saturdays.

We are coming to the end of the Boursin mountain. Having seen how well this stuff melts into a sauce I figured it would behave itself in a soup.

My father frequently fed me soup for lunch on Saturdays so it must be ingrained in me. (He used to have me make said soup from powdered sachets though. Bleugh. Forgive me – this was before I’d had any cookery lessons at school or discovered what a blender was).

As an aside, I will let you know that my stick blender vanished in early July. I have hunted high and low throughout house and cellar and the stick blender is nowhere to be seen.

So it was jolly convenient when Buy It Direct got in touch and offered for me to road test a gadget from their site. This smurf coloured Morphy Accents hand blender, as you can see in the picture above has both a whisk attachment and mini chopper chamber in addition to the standard blending attachment.

I like that the blender is metal, the touch button is very sensitive (my previous Braun required strength to keep the button pressed). The handle is much weightier than my old model and I’m still getting used to it.

The Morphy Accents hand blender did a great job of blending my mushroom soup but I will have to report back separately how it’s done whisking eggs or chopping anything as I’m yet to use it for these features.

Ted was completing a food diary for homework when I served this. He wrote simply “soup and bread”. I tried to get him to expand this to “home made creamy mushroom soup and black olive ciabatta” but he wasn’t having any of it!

200g mushrooms, sliced (chestnut ones feel especially autumnal!)
1 tbsp butter
284ml tub of cream (I used reduced fat double by Elmlea but single or low fat single would be fine too)
1 vegetable stock cube or stock pot paste
700ml boiling water
3 mini packs of black pepper Boursin (around 2 tbsp)
seasoning to taste
You could use an alternative soft white cheese and add pepper separately. Also, if you prefer a lower fat soup feel free to decrease the ratio of cream to water.

1. Fry the mushroom in the butter until soft.
2. Dissolve the vegetable stock cube or pot in 700ml boiling water in a jug. Pour over the mushrooms together with the cream and Boursin/soft white cheese and stir.
3. Once combined, take off the heat and blend until smooth. Serve immediately.

This soup is being sent to this month’s mushroom themed No Croutons Required jointly organised by Tinned Tomatoes (and this month hosted by) Lisa’s Kitchen.

Raw salads are a welcome change after Christmas. This brussels sprout coleslaw is perfect for using up left over ingredients you may have in the fridge. 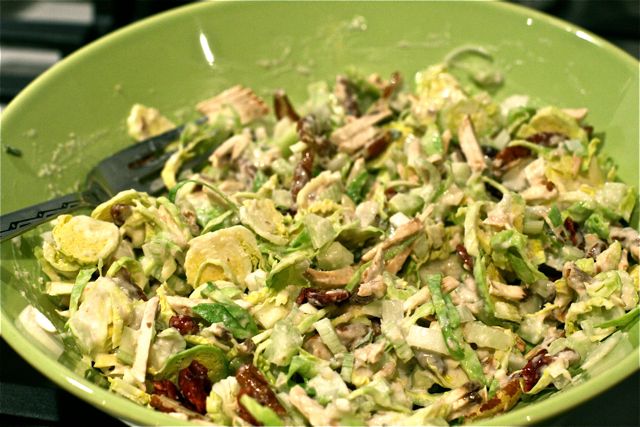 It’s the tail end of the Christmas bag of sprouts and although I will certainly buy more during the winter, I feel I ought to do something interesting with the six lonely ones left.

This brussels sprout coleslaw was inspired by a leftovers suggestion in this month’s Delicious magazine. Assembling this from memory the ingredients are completely different apart from the thinly sliced raw sprouts and horseradish factor….