Chinese New Year was last week – I think – so we were eating these in noodles in timely fashion even if I’ve not blogged them until now.

This speedy supper can be whipped up in barely 15 minutes using left over roast meat from Sunday lunch.

The original plan for said Sunday lunch was to emulate the slow cooked pork recipe in February Delicious Magazine’s roast of the month. I made their January roast with great aplomb (slow cooked topside of beef). Since I’m not hugely confident cooking big pieces of meat I thought cooking each of their roasts of the month every month was a good idea.

Then the February recipe was a 4 kg joint of pork shoulder for 8 people which seemed rather gigantic and expensive to me and way over our needs.

Instead I bought this handsome beast in Waitrose for around £13. He came shrink wrapped with all the herbs on and was the same cut used in the magazine recipe so I decided to do that instead. I didn’t stick to the Delicious technique either which necessitated 5-6 hours in the oven, instead I followed the Waitrose instructions of 3 hours at 180c / Gas 4, placed the joint on a rack above steaming stock and segments of onion that became the gravy.
Whilst the pork was in the oven we went out for a walk to Walthamstow’s Wood Street Market, stopped off for a hot chocolate in Cafe Bonito. When we came home we were welcomed by meaty aromas and a perfect joint. The stock and onions made the most sublime gravy.
The joint yielded enough lovely tender pulled pork meat for 4 meals for 3 of us. So that’s around £1.25 per portion which I thought was respectably good value. The slightest toughness in meat has Ted turning it down, he still has his baby teeth and it’s hard going for him! I’m pleased to report that he gobbled this pork up without any question and has been delighted to be served more of it in leftovers during the week.
I’m considering a Wahaca style pork pibil type dish with the final portion but for today here’s the Oriental twist:
Pulled Pork Noodles with Savoy Cabbage
Serves 3
Ingredients
Leftover cooked pulled pork meat (roughly 75g per person)
Dried egg noodles (I used 2 sheets of the dried bundles i.e. supermarket own brand, Blue Dragon or Sharwoods etc)
1 onion finely sliced
1 tbsp sesame oil
5 leaves of Savoy cabbage, shredded
6 mushrooms cut into chunks
2 tbsp light soy sauce
Directions
In a large saucepan, pour boiling water over the noodles and bring back up to a simmer for 2-3 minutes. Then turn off the heat but leave the lid on for a further 5 minutes.
Meanwhile, heat the sesame oil in a large frying pan and fry the onion slices.
When the onion has softened slightly add the shredded cabbage and mushrooms and cook for 2-3 minutes. Add the meat and pour over the soya sauce and heat through.
Drain the noodles and tip these into the frying pan too. Toss the hot noodles in the meat and vegetables and serve.
Tip:
Trimming the spines from the savoy cabbage leaves mean they cook quicker. Serve with sweet chilli sauce.

I am sending these noodles with seasonal savoy cabbage to Ren’s Simple and in Season, Helen & Camilla’s Credit Crunch Munch (leftovers!) this month hosted by My Golden Pear, mine and Katie’s new Speedy Suppers event for 30 minute meals.

To Elizabeth’s Kitchen Diary for Shop local (cabbage from Walthamstow Farmer’s Market), Fiona hosting Elizabeth’s No Waste Food Challenge and finally, since there are three vegetables in this dish, another new event Extra Veg hosted by Helen and Michelle Utterly Scrummy.

It’s definitely that time of year again, after a summer of salads, soup is firmly back on the menu. My six year old even asked for some for his supper.

Normally I consider soup a weekend lunch type of thing, I quite often make soups on Saturdays.

We are coming to the end of the Boursin mountain. Having seen how well this stuff melts into a sauce I figured it would behave itself in a soup.

My father frequently fed me soup for lunch on Saturdays so it must be ingrained in me. (He used to have me make said soup from powdered sachets though. Bleugh. Forgive me – this was before I’d had any cookery lessons at school or discovered what a blender was).

As an aside, I will let you know that my stick blender vanished in early July. I have hunted high and low throughout house and cellar and the stick blender is nowhere to be seen.

So it was jolly convenient when Buy It Direct got in touch and offered for me to road test a gadget from their site. This smurf coloured Morphy Accents hand blender, as you can see in the picture above has both a whisk attachment and mini chopper chamber in addition to the standard blending attachment.

I like that the blender is metal, the touch button is very sensitive (my previous Braun required strength to keep the button pressed). The handle is much weightier than my old model and I’m still getting used to it.

The Morphy Accents hand blender did a great job of blending my mushroom soup but I will have to report back separately how it’s done whisking eggs or chopping anything as I’m yet to use it for these features.

Ted was completing a food diary for homework when I served this. He wrote simply “soup and bread”. I tried to get him to expand this to “home made creamy mushroom soup and black olive ciabatta” but he wasn’t having any of it!

200g mushrooms, sliced (chestnut ones feel especially autumnal!)
1 tbsp butter
284ml tub of cream (I used reduced fat double by Elmlea but single or low fat single would be fine too)
1 vegetable stock cube or stock pot paste
700ml boiling water
3 mini packs of black pepper Boursin (around 2 tbsp)
seasoning to taste
You could use an alternative soft white cheese and add pepper separately. Also, if you prefer a lower fat soup feel free to decrease the ratio of cream to water.

1. Fry the mushroom in the butter until soft.
2. Dissolve the vegetable stock cube or pot in 700ml boiling water in a jug. Pour over the mushrooms together with the cream and Boursin/soft white cheese and stir.
3. Once combined, take off the heat and blend until smooth. Serve immediately.

This soup is being sent to this month’s mushroom themed No Croutons Required jointly organised by Tinned Tomatoes (and this month hosted by) Lisa’s Kitchen.

Before you think I still have turkey left, I made this over two weeks ago! 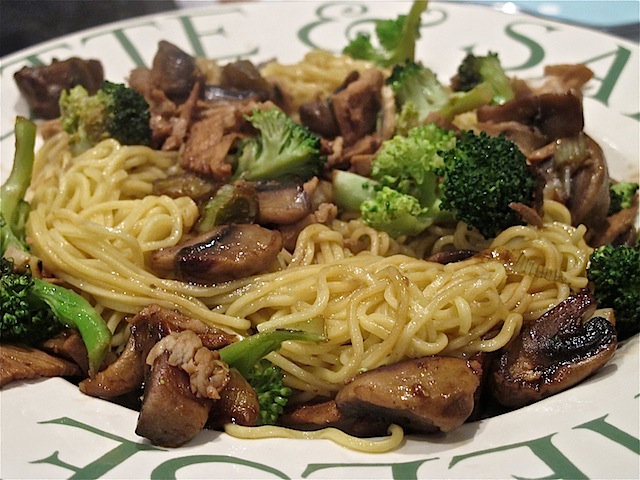 Every December my husband insists on ordering a Norfolk Black turkey from our local butcher. There are generally only four of us for Christmas dinner with one or two sets of guests over the following few days – two of whom are vegetarian anyway. So it becomes an annual debate whether …